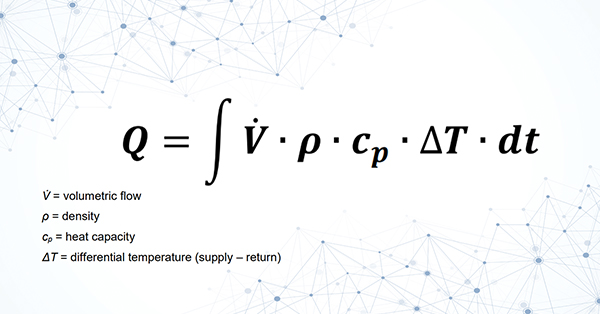 Glycol is commonly used to prevent heat transfer fluids from freezing in heating, cooling, and air conditioning systems. It is typically found in systems where pipework is exposed to the exterior environment – rooftop units, free cooling, cooling towers – and also in green energy applications, such as solar thermal collectors. Glycol may also be used in district cooling systems – for example, in high rise properties – and low temperature energy networks serving a number of customers. However, the addition of glycol into any system can result in large errors in thermal energy measurement when using a meter intended for water alone.

The Pros and Cons

Modern heat transfer fluids are complex mixtures of around 60 to 75 percent deionized water, 25 to 40 percent mono-ethylene or propylene glycol and, typically, additives such as stabilizers, corrosion inhibitors, oxygen scavengers, and anti-fouling components. The significant advantage of using glycol-water mixtures as heat transfer fluids, rather than only water, is that they allow systems to operate at temperatures below zero. However, there are a number of issues associated with using these mixtures. They are considerably more expensive than water and have a lower heat capacity, requiring up to 30 percent higher flow to achieve the same energy transport. At low temperatures, glycol-water mixtures also become quite viscous, needing between 50 and 100 percent additional pump energy to match the heat transfer of water alone. A further complication is that ethylene glycols are toxic, and propylene glycols – along with many additives – are not environmentally friendly, meaning that professional disposal is required once the fluid reaches the end of its service life.

There are significant variations between the compositions of pre-mixed glycols from the myriad of manufacturers on the market, with each provider offering a range of different formulations for specified applications. The precise composition of these pre-mixed glycols can also change periodically for cost optimization or due to new legislation regarding the ingredients, often without manufacturers informing customers. And, while it is common practice in Europe to buy pre-mixed glycols, in North America mixing of heat transfer fluids can also be performed on site. The whole issue is further complicated by the fact that the fluid composition, and therefore its physical properties, can change unpredictably over time, due to:

Any changes in the composition of the heat transfer fluid, as outlined above, will have an impact on its density, heat capacity and viscosity which, in turn, will affect the measured thermal energy (Q, see equation below) and the measured volumetric flow.
A change in viscosity will have an effect on the flow profile, or velocity distribution, within the pipe. Consequently, if a thermal energy meter intended for use with water is employed with a glycol-water mixture, changes in any of these fluid properties can result in a cumulative heat measurement error of as much as 40 percent. However, if the correct fluid parameters are known, it is possible to compensate for this.
Thermal energy, Q, is defined by the formula: 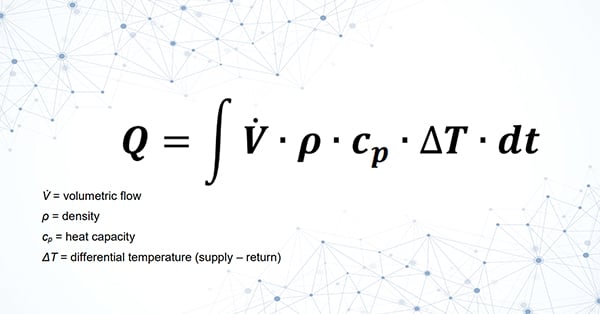 Despite this issue having been widely recognized and understood for many years, the only options before now was to accept the measurement error, avoid the use of glycol in systems where the heat transfer needs to be measured. And where accurate measurements are essential to ensure correct consumer billing is to invest in expensive measurement equipment to allow manual compensation for changes in the fluid properties.

Belimo now offers an inline flow sensors that provide automatic, continuous glycol measurement and compensation, ensuring optimal HVAC system performance. With using ultrasonic transit-time technology, this approach offers an accurate method for thermal energy measurement that is insensitive to magnetite problems, has a longer lifetime than impeller technology and is suitable for use with a wide range of heat transfer fluids of varying glycol concentrations.

Increasing Efficiency of Energy Usage in a Building

“The buildings sector accounts for about 76% of electricity use and 40% of all U. S. primary energy...
Read More

The Benefit of Thermal Energy Metering

With increased energy costs and mandates from government agencies to reduce carbon emissions, it is...
Read More