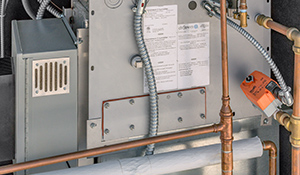 The Evolution of Control Valves

Control valve technology has significantly evolved over the last two decades from simple actuation to the realm of truly smart valves. Smart valves do more than simply position; they have various flow and/or temperature sensors installed within the valve body and/or in the air or water stream. The combination of valve, actuator, and sensors allows the smart valve to automate many processes that would be difficult or time-consuming to put into a DDC controller.

For decades, globe valves dominated the HVAC control valve market until the Characterized Control Valve (CCV) was released. One of the first products to offer accurate reproduction of the equal percentage curve at low flow rates was a problem for other valves. The CCV is 'air bubble tight' meaning it does not permit any water to pass or leak through the valve when closed. The CCV continues to be the best-selling control valve on the market, with millions sold worldwide. 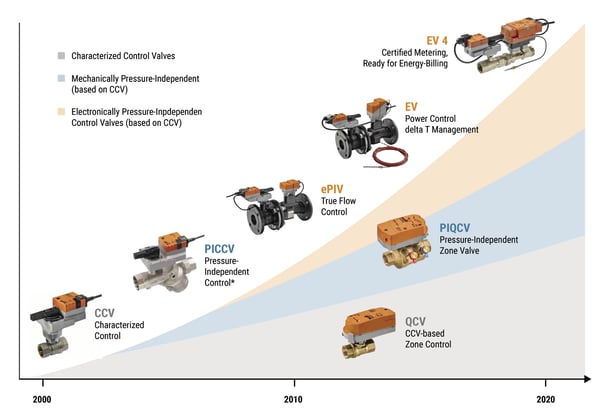 Note: PICCV product has since been replaced by PIQCV & ePIV products.

In 2003, the first pressure independent characterized control valve (PICCV) was designed exclusively for the HVAC industry. It was using the same valve technology found in the CCV with a robust mechanical pressure regulator integrated to absorb pressure changes in the system. The valve allowed the desired flow to remain constant despite system pressure changes. In 2010, the groundbreaking electronic pressure independent valve (ePIV) came to the market. For the first time, true flow measurement was available on a valve. The ePIV combines an accurate wet calibrated ultrasonic flow meter with a characterized control valve in one device. This combination allows for precise control of the flow with the capability to read actual flow at all times.

In 2012, the Belimo Energy Valve™ (EV) was introduced. The Energy Valve offered the same components as the ePIV with built-in software and temperature sensors in the supply and return water to measure the Differential Temperature (delta T) measurement across the coil or heat exchanger. Delta T measurement allows the valve to monitor continually, and built-in software enhances the heat exchange's efficiency, avoiding costly and inefficient overflow. The Energy Valve opened a new chapter with advanced connectivity. Besides the analog and bus interfaces supporting Modbus and BACnet protocols, the Energy Valve also included an embedded web-server simplifying mechanical and electrical commissioning to seconds. The Energy Valve can securely connect to the internet; the Energy Valve had become the industry's first Internet-of-Thing (IoT) control valve.

In 2013 and 2014, the ZoneTight zone valves were released. The valves combine a bubble-tight ball valve designed with a low power actuator for zone applications offering maximum efficiency in tight spaces. The ZoneTight series set new performance standards for pressure dependent (QCV series) and pressure independent (PIQCV series) zoning applications. The QCV and PIQCV provide 95% less power consumption than conventional zone valves and easily connect to the actuator allowing operators and technicians to install valves quickly, easily, and without the use of tools, helping to simplify commissioning and reducing labor costs.

In 2021, the launch of a new range of certified thermal energy meters and the enhancement of the Belimo Energy Valve. With seamless and direct integration to the BMS or a 3rd party Building IoT platform, the Thermal Energy Meters and Energy Valve provides valuable data on current operation modes, temperatures, flows, and energy consumption which can be used for tenant billing.

Valve innovations over the years have helped to solve severe problems and inefficiencies in the hydronic control of HVAC systems, ranging from leaking valves, discomfort from pressure fluctuations, and low delta T.