The grain hopper begins the brewing process. The bulk amount of base and specialty grains, typically malted barley, and supplementary grains enter the system and move through the roller mill for crushing. The grains move on to the grist case where they sit overnight. (Small operations often don’t have a grist tank. They crush and convey directly into the mash mixer.) The crushed grains are transferred to the mash mixer. The grains and warm water are mixed to extract their natural flavors and colors. Mashing converts the starch of the grains into sugars, typically maltose to create a malty liquid called wort. The wort is separated from the spent grains during the two-stage lautering process. The spent grains are saved for a local farmer to feed their livestock.

In the wort kettle, the ingredients boil; hops and other flavorings are added and continue to a high boil for 45 to 90 minutes. Chemical reactions occur at this stage, hop flavors are released, bitterness and aroma compounds are developed, and the wort becomes concentrated and sterilized. Some wort kettle manufacturers have used Belimo proportional actuators on gas and steam valves for more precise control. Belimo products can be used on the “utility” side of the system or areas where “sanitary” stainless steel devices are not required. At the end of this process, the solid hop particles are separated from the wort.

The hot wort passes through the chiller and is chilled through a heat exchanger or heat recovery unit. The batch of wort goes into the fermentation tank where the yeast is added. Typical beer fermentation vessels are glycol jacketed and have a central temperature control panel interfacing with up to 16 individual mounted temperature sensors. Every RTD temperature sensor and valve assemblies are home run to the central control panel. This creates an enormous amount of wiring and labor. Small craft breweries will have three or four fermentation vessels while others may have many more. Some chillers are designed using Belimo proportional actuated valves with BACnet MS/TP or Modbus RTU. By using a bus connected actuator, you can wire twenty-four or more individual fermentation tanks to one centralized control panel. Belimo bus connected actuators are designed to accept one or two passive or active sensors. The RTD temperature sensor is integrated into the actuator, and the output is shared over the communication bus to the controller.

In this scenario, only one cable comes out of the central control panel all other actuated valves are daisy chained creating an efficient, seamless integration. When a brewery wants to add on more fermentation vessels, the connection is made at the last actuator on the bus. Within the control panel, you can activate the number of tanks required. A tank can be taken out of service, and the remaining will continue to operate. The system runs continuously 24 hours a day, seven days a week, always at design specification.

Belimo proportional control actuators are also used on yeast propagation systems; where it is essential to maintain tight temperature tolerances when propagating yeast. 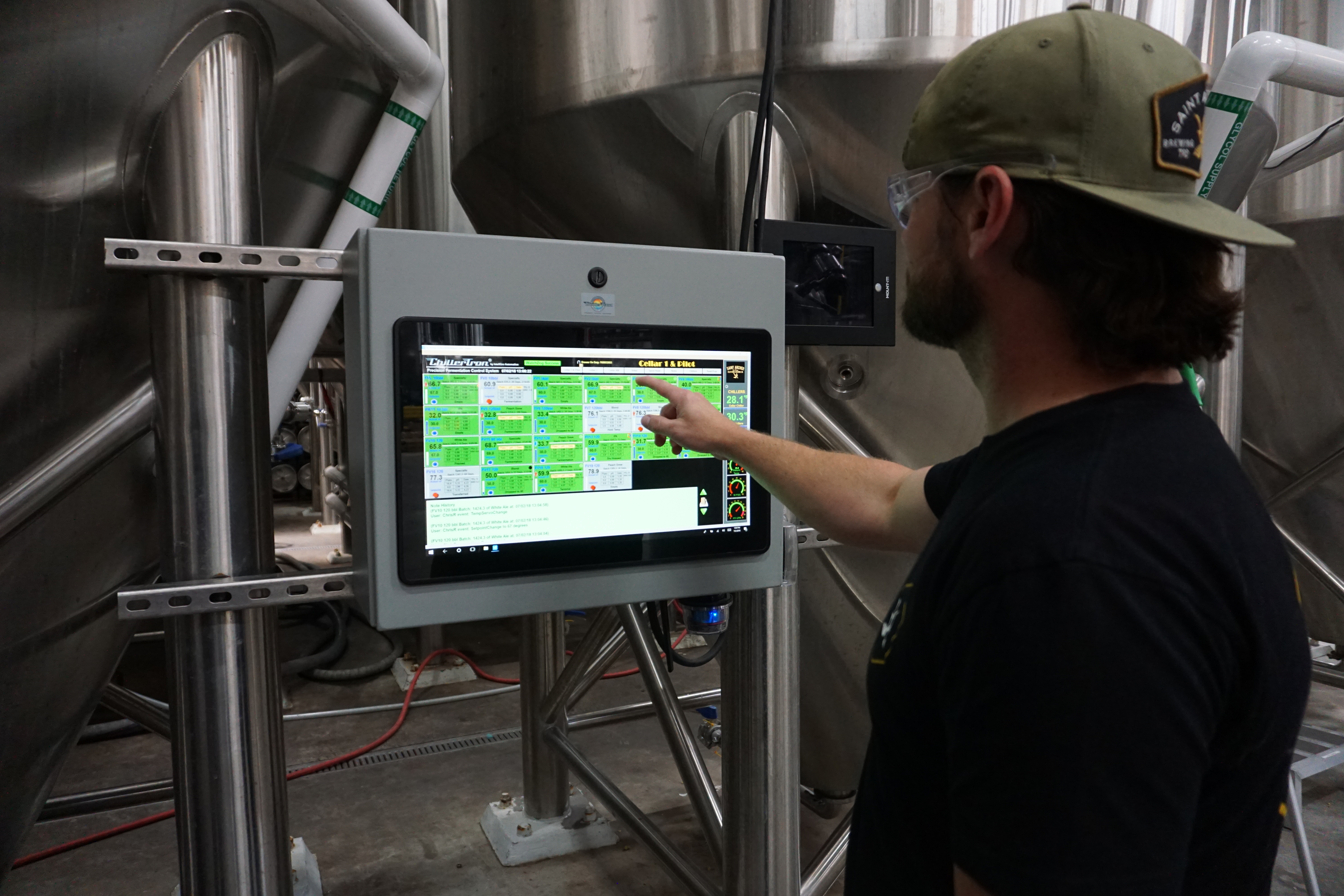 The cooling system acts as a life support system for the yeast by keeping it from overheating and dying or producing other undesirable types of alcohols due to heat stress. On the fermentation control systems, Belimo proportional control valves are used instead of solenoids. The reason the proportional control valves outperform solenoids is that they offer very fine control adjustments by allowing a small amount of coolant through the cooling jackets for a steady flow, especially when paired with a computer controlled temperature algorithm, such as ChillerTron controls. Solenoids are on/off, so every time they open, they flood the cooling jackets with low-temperature coolant at above design GPM until the tank temperature drops to a degree or two under the setpoint. This rapid temperature change shocks the yeast around the tank walls. When this temperature shock occurs, it knocks the yeast out of the fermentation phase, and they become dormant. It is challenging to get the yeast “eating again.” This slows down the fermentation process. Belimo actuators control the flow of chilled glycol through the jacket of the fermentation vessels to regulate temperatures and chill the beer down. The Belimo valves operate quietly and smoothly, whereas the solenoid valves cause pipe hammering which can be loud and distracting.

The advantage of an automated fermentation control system is the improvement of beer production time and repeatability reducing costly errors with remote access and text alarms. Remote access is available through your iPhone, iPad, Android and Window devices. If production problems occur, for example, a process pump or compressor breakdown you detect it instantly and fix it before it affects your production. Continuous data logging and graphing of important brewing parameters will help support the process for further improvements. Remote text messaging and emails for alarms yields peace of mind while individuals need to be away from the brewery.

The extremely stable temperature controls with Belimo proportional control valves out-perform solenoids. Studies have shown proportional control breweries have an increase in beer production by an average of 15% stated by Robert Esposito of ChillerTron. What would have taken ten days to produce, you could achieve in eight days or less.